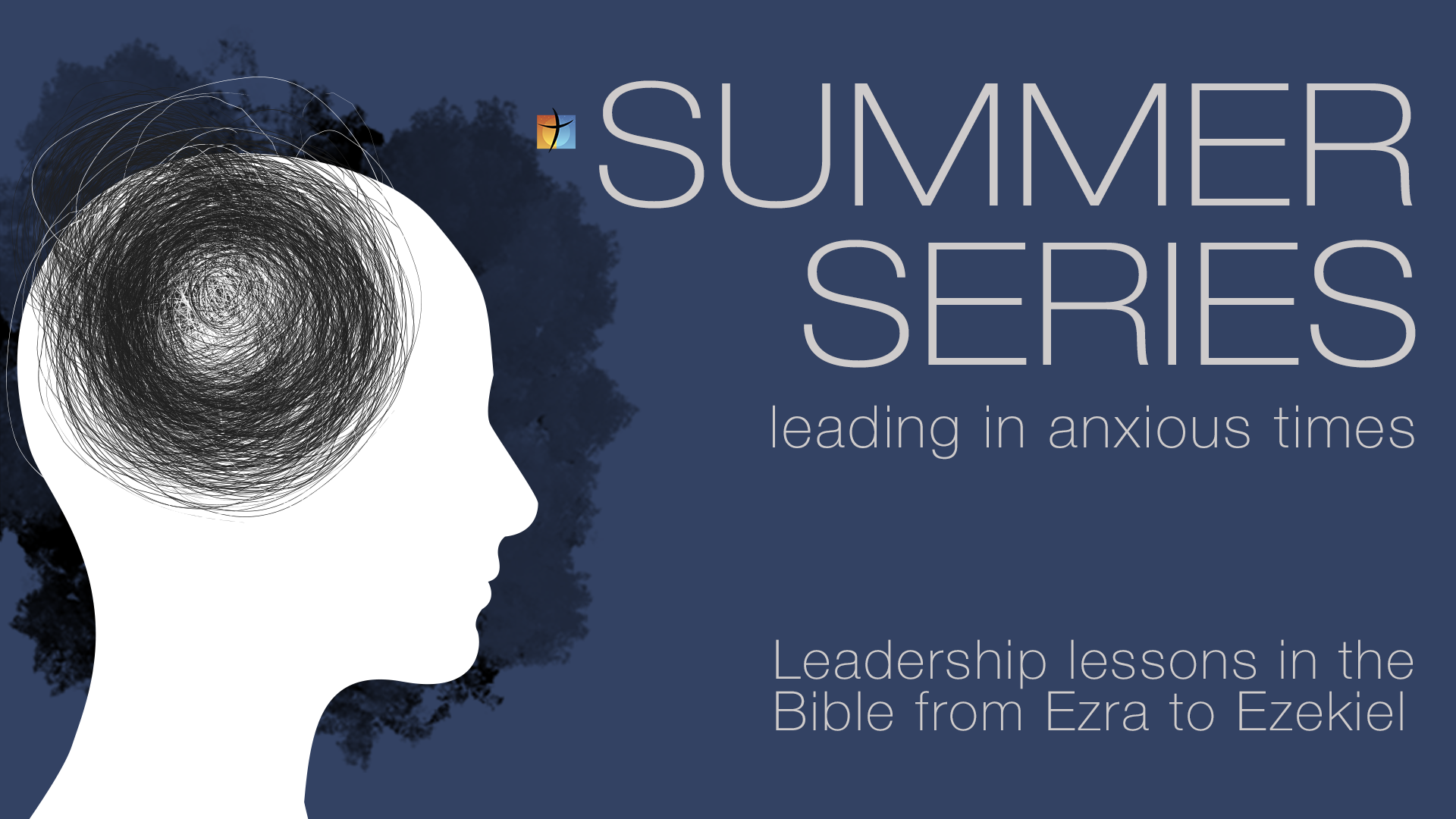 Anxious times call for a clear message, a reminder of the calm and steady presence of God. Your leadership at home or at work will affect the people you lead. You donât need a fancy title to be a leader. You can make a positive impact where you are. Esther was an orphan; Nehemiah was a regular guy. These men and women did not part the sea nor raise the dead. They performed no miracles, rather, Nehemiah and Esther simply saw an opportunity to help their people and they did. Their life stories are not much different than ours.

Ezra had to deal with an epidemic of intermarriage between Jews, God's chosen people, and pagans who were not part of God's Covenant. Ezra prepared his heart to learn God's Law first. He then lived what he learned, and led God's people in anxious times. "For Ezra had prepared his heart to seek the Law of the Lord, and to do it, and to teach statutes and ordinances in Israel". (Ezra 7:10) Do as Ezra did: Seek God daily, then prepare, plan, proceed, and celebrate each day with Him.

Nehemiah had the vision to rebuild the wall of Jerusalem. Nehemiah prayed first. He planned his passion for his people and persevered in the face of trials and opposition. Then the king said to me, "What do you request?" So I prayed to the God of heaven. And I said to the king, "If it pleases the king, and if your servant has found favor in your sight, I ask that you send me to Judah, to the city of my fathers' tombs, that I may rebuild it". (Nehemiah 2:4-5). Do as Nehemiah did: Pray to God daily, then plan ahead, and pursue your passion and purpose each day with Him.

Mordecai took prompt action. The crisis facing his people called for action. Mordecai prayed, humbled himself, and was ready to make a great personal sacrifice. And Mordecai told them to answer Esther: "Do not think in your heart that you will escape in the king's palace any more than all the other Jews. For if you remain completely silent at this time, relief and deliverance will arise for the Jews from another place, but you and your father's house will perish. Yet who knows whether you have come to the kingdom for such a time as this?"-Esther 2:13-14 Do as Mordecai: Pray, fast, and take action. Do not worry about taking credit. Mordecai worked diligently in the background and Esther got the credit.

ESTHER: A leader acts with courage

Esther wanted to save her people. Esther listened to Mordecai and sought God for wisdom. She understood what was at stake, counted the cost, and then courageously executed her plan. Then Esther told them to reply to Mordecai: "Go, gather all the Jews who are present in Shushan, and fast for me; neither eat nor drink for three days, night or day. My maids and I will fast likewise. And so I will go to the king, which is against the law; and if I perish, I perish!" So Mordecai went his way and did according to all that Esther commanded him. (Esther 4:15-17) Seek God for wisdom daily, listen to Him, understand what He expects from you, count the cost, and then courageously follow Him.

ISAIAH: A leader rises to the occasion

Isaiah was called to minister to a nation that had turned against God. Isaiah heard God's voice, stepped up to the plate, raised his hand, and spoke up, and responded to the call. Also, I heard the voice of the Lord, saying: "Whom shall I send, And who will go for Us?" Then I said, "Here am I! Send me". (Isaiah 6:8) Listen to God's voice daily, when leadership fails at home and at work - be the first to raise your hand, speak up, and follow His instructions.

JEREMIAH: A leader Is aware of the challenges

Jeremiah had a daunting task to admonish God's people to repent of their sins and turn back to God. Jeremiah heard God's call, was reluctant to respond, but in the end, obey Him. Then I said: "Ah, Lord God! Behold, I cannot speak, for I am a youth." But the Lord said to me: "Do not say, âI am a youth,' for you shall go to all to whom I send you, and whatever I command you, you shall speak. Do not be afraid of their faces, For I am with you to deliver you," says the Lord". (Jeremiah 1:6-8) Trust in God's calling daily: He chooses, calls, and equips you for His work.

EZEKIEL: A leader is caring

Ezekiel had to face a wayward nation that had openly rebelled against God. Ezekiel saw a vision from God, a vision of hope, a new thing, a restored house, a new spirit, and a new heart. I will give you a new heart and put a new spirit within you; I will take the heart of stone out of your flesh and give you a heart of flesh. I will put My Spirit within you and cause you to walk in My statutes, and you will keep My judgments and do them. Then you shall dwell in the land that I gave to your fathers; you shall be My people, and I will be your God. (Ezekiel 36:26-28) Live by God's vision daily. Live by the new spirit and new heart that comes only from Him.